Home » Christmas » How to Make a Healthy Holiday Wassail

How to Make a Healthy Holiday Wassail

In Yuletide, you may hear friends and neighbors singing “Here we come, a-wassailing.” But besides being a funny word, what is wassail? Traditionally, wassail is an Anglo-Saxon drink often made with a combination of ale, cream, or apple cider. If you’re looking to spice up your holiday party this year by bringing celebrations of Christmas way back to its roots, there’s not many better ways than with wassail! You could also use the mulled drink to keep you warm while you’re caroling in the cold. Either way, wassail’s long ties to Christmas, and the multitude of recipes and modernizations, make it perfect for however you’re celebrating the holidays this year!

So, what is wassail, and why are we going “a-wassailing?” We’ve covered this in greater detail in “Why Do We Celebrate That? Classic Christmas Traditions,” but to recap quickly, the term wassail derives from the Anglo-Saxon “waes hael” or the Old Norse “ves heill.” Both are well-wishes that essentially mean “be well” or “good health.” Originally, the term referred to the celebration of good cheer that paired with the drink. Whether it was pouring the drink on trees to ward off evil spirits or wishing your lord good health and being welcomed into the home for wassail, the drink was central to wassailing.

You may be taking part in the tradition already without even knowing it!

Over time, one form of wassailing, where wassailers went from home to home, would merge with other traditions to become the caroling that we have today. So, while you may not be sharing a glass of wassail with your feudal lord at the end of the year, you may be taking part in the tradition already without even knowing it! If you’re curious about where other classic Christmas traditions started, don’t miss the rest of that article. It’s packed with tidbits on everything from Christmas parties to mistletoe.

If you’re curious about making a traditional wassail, you’re in luck! Colonial Williamsburg has their own recipe from The Williamsburg Cookbook. We’re sharing this recipe in particular, because it’s from a reputable source that specializes in historical recreation and calls for readily available ingredients. Check it out! 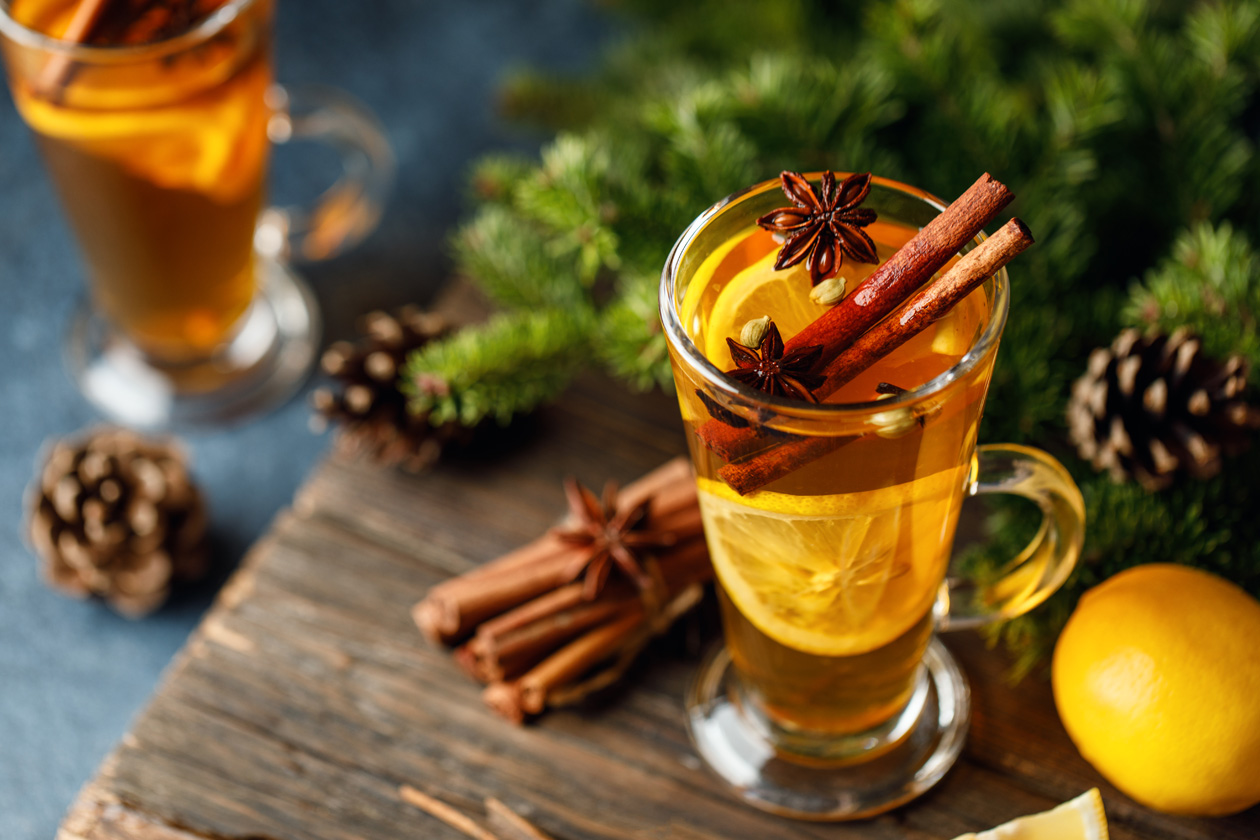 Head over to Colonial Williamsburg’s recipe to learn what to do next!

Ways to Make It Healthier

If you’re trying to have a health-conscious holidays this year, that doesn’t mean you need to completely shun wassail! Most wassail recipes, especially modern ones, call for an apple or apple cider base. This is then mixed with orange and pineapple juice, much like the Williamsburg recipe above. So far, not the worst ingredients, right? The juices are pretty easy to improve simply by opting for no sugar added versions. That shouldn’t be missed too much, since we’ll add flavor with spices like cinnamon and cloves. We’ll also be using a little brown sugar for that important molasses element that it brings.

Most wassail recipes call for an apple or apple cider base mixed with orange and pineapple juice.

Another easy way to cut out the calories is to exclude the booze, which often gives empty calories. We can mimic the flavor like we have in our series on mocktails. You may actually notice that the recipes we shared are similar to a mocktail we’ve already created, our Harvest Spiced Cider Toddy. We’ll use this as the base for our healthy wassail mocktail, removing the alcohol, but amping up the flavor a bit more!